Would you like to own a monopoly platform business which makes 80% operating margins and which will not be disrupted by technological innovation?
Read on to know more about this business and exactly why its current or future competitors will not be able to make a dent in its market share

Which business are we talking about?
IEX India – it is the stock exchange of the electricity sector.
It is a monopoly business which is very profitable with operating margins of 80%+.

Why do we need to have a different exchange just for the electricity sector?

What competition does IEX India face right now?
The exchange business is a monopolistic business. Once the buyers and sellers come to prefer a particular platform, they tend to stick to it. This phenomenon is observed across markets and geographies.

There are two other power exchanges established in India

We did spend a lot of screen time to understand that it is extremely unlikely that a competitor will take away business from IEX India. This was important to understand the robustness of the business that IEX India is.

Threat of disruption?
A scenario where people will not consume electricity seems unimaginable at this moment. All the pleasures of modern technology viz. washing machines, computers, mobile phones, mass manufacturing etc. require electricity.
Irrespective of whatever “app” is created by a future “start-up”, physical delivery of electricity will require transmission lines and hence the business of transacting electricity will have to go through coordination with NLDC and the regulatory process.
We can very well remove any doubt about the possibility of disruption from our minds.

Show me the money – How do the financials shape up?

What is the catch?
There must be some problem with the company.
Of course, no investment can be perfect and the catch with IEX India is that growth is limited. Electricity demand typically increases at approximately 70% of the GDP growth and thus the Indian electricity demand will increase by about 5% every year assuming an average GDP growth of 7% for the future.
Average growth in electricity consumption in India in the last 11 years is 6%. 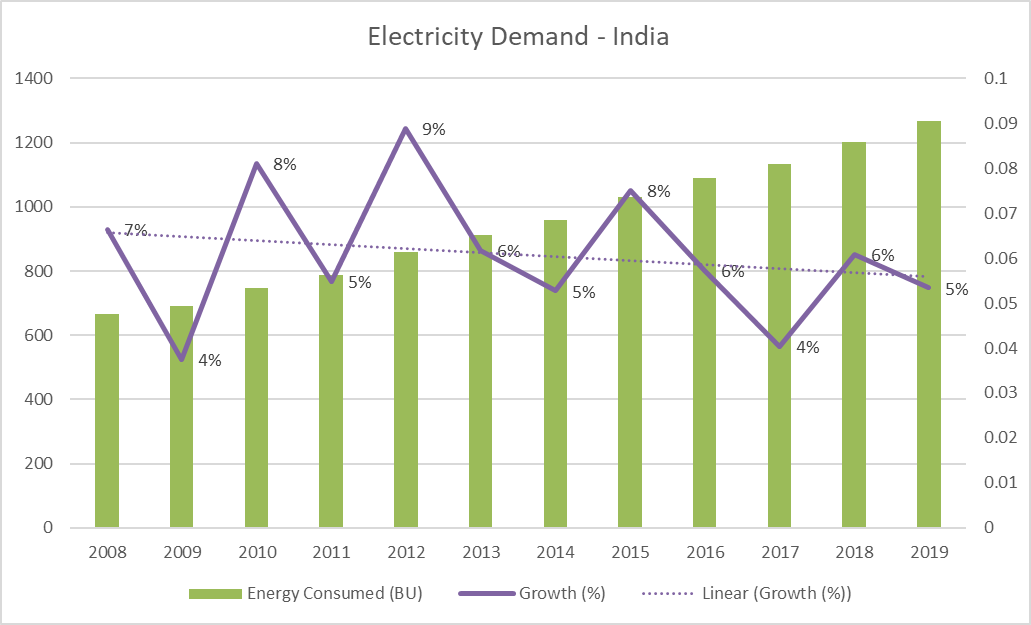 IEX India may not turn out to be a fast-growing company.

However, the business does not have the ability to grow by re-investing its profits. Growth in sales is largely determined by factors external to the company.
The decision to invest in this company boils down to

“Should we pay a PE ratio of 23 times to a highly profitable monopoly business which may not grow by more than 5% in the long-run?”

Though earnings quality and predictability are very high for IEX, the earnings growth is mediocre.
A lot of famous and respected fund managers have paid higher to own this business

Mohnish Pabrai (author of the Dhando Investor), Guy Spier (of “Education of a Value Investor” fame) have bought this stock at higher valuations. In fact, Akash Prakash of Amansa Holdings has also recently bought the stock.

However, my take is – you and I invest in stocks to make outsized returns.
Why will we take the risks of investing in stocks to make a 10% CAGR returns?
Investing even in a great business like IEX at a PE ratio of 23 when growth prospects of the company are around 5% will not yield outstanding results.
The return expectation of institutional investors like Pabrai, Guy Spier or Akash Prakash managing foreign funds could be much lower than Indian investors (afterall interest rates in most of the developed world are 0%)

But there are some green shoots which could turn the stock into a screaming buy. Several regulatory measures have been proposed which have the potential of exponentially increasing the volume of electricity traded on the power exchanges.

If reforms in serial no. 2, 4, 5, 7 get implemented, it will trigger a huge surge in the trading volumes on IEX India. Our job as an analyst is to be prepared to take advantage of the opportunities that the markets present us.

Do not consider this article as a recommendation to buy or sell a stock. This article is an illustration of the kind of analysis that goes into fundamental research and equity investing.

Please seek advice from your investment advisor before making any investment decisions. The author (@amey153) is a SEBI registered Investment Advisor.

If you want to seek investment advice click here and someone from my team will get in touch with you within 48 hours.

Note: I have by purpose tried to keep detailed explanations of the technical intricacies of the electricity sector to the minimum otherwise the jargon becomes too over-whelming for the general reader. You need to just understand just one thing about the business of IEX India – it is the “stock exchange” for the power sector.