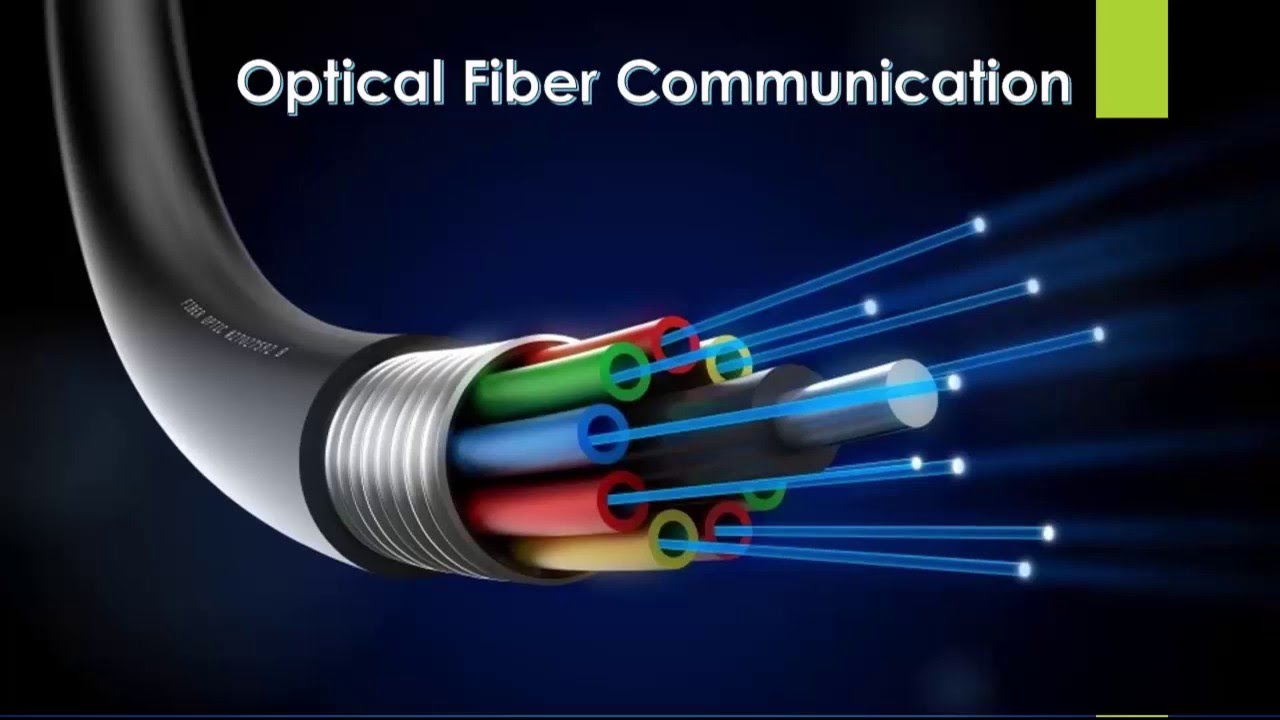 Selling your stock at a loss is always painful.
Taking such a decision decision takes a lot of courage.
However, difficult things have to be done if one wants to make real money in equity markets – get rid of your weak positions before they pull you down with themselves.

Today, I want to write about one such stock which I have sold at a loss – Sterlite Technologies.

Let us first look at what is good about the company

A good balanced analysis of Sterlite Tech may be found here
https://finception.in/stocks/sterlite-technologies-ltd/

However, the backbone of the company still remains optical fiber manufacturing and most of the revenue and profits still come from this segment – especially more so with the recent capacity expansion from 30 Mn fkm to 50 Mn fkm.

Now, let us look at what the company mentions in its 2017 annual report about Market and Competition risks 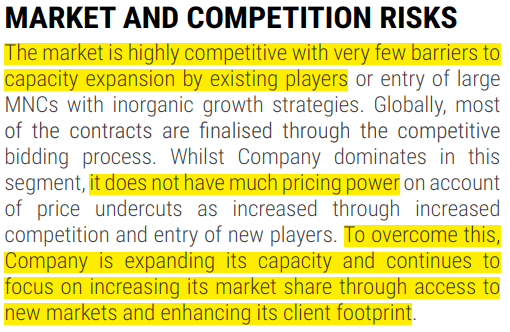 Sterlite Tech is a price taker and the way it is trying to overcome this risk is by expanding capacity and gaining economies of scale. We can easily extrapolate the strategy of other big players in such a competitive market – with increasing demand, the other players are also aggressively expanding capacity.

The market for optical fiber preform (the core) is dominated by approximately 10 players globally including China. Almost all players had announced aggressive capacity expansion projects in 2017 and 2018.

We see that step 1 & 2 were playing out in calendar years 2017 and 2018.
Come 2019 and one of the large tenders for procuring optical fiber cable by China mobile saw a significant reduction in discovered prices. 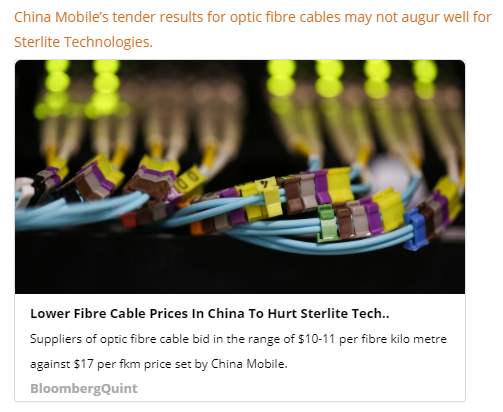 The Sterlite management immediately came out to emphasize that this was a temporary issue and gave elaborate reasons as to how and why it will not affect the performance of Sterlite Technologies. You may read one of the interviews by the CFO of Sterlite Technologies here.
https://economictimes.indiatimes.com/markets/expert-view/china-issue-temporary-wont-hit-sterlite-big-anupam-jindal/articleshow/67687245.cms?from=mdr

Let us look at the numbers being reported by Chinese optical fiber producers.
YOFC which is one of the largest producers in China reported a 35% reduction in revenue in the Mar 2019 quarter.

Well, the optical fiber demand in China is 1.5 times the global demand ex-China. The management of Sterlite Technologies repeatedly opined that a “temporary demand slowdown” in China would not impact business outside China.

Now, let us look at what Corning, the company that invented the optical fiber had to say in its Conference call in Aug-19.

This is dramatic – instead of growth which was predicted at the start of 2019, Corning now sees the market for optical fiber to show contraction.

The weakness that started in China has now spread to India and South East Asia.
What was the impact on Indian optical fiber producers?

Aksh Optifiber, one of the players producing optical fiber based out of India defaulted on loans in May 2019. CARE ratings downgraded the company debt to D for non-servicing of debt on 27.05.2019
http://www.careratings.com/upload/CompanyFiles/PR/Aksh%20Optifibre%20Limited-05-27-2019.pdf

Step 4 is complete.
And there is a lot of data as seen above to suggest that step 5 will play out in the market.

Does the current valuation price-in all the negatives about the business, company, industry and its future?

In a commodity industry, with supply outstripping demand, expectation of demand de-growth and falling prices a valuation of EV/EBIT of 12 seems expensive.

The fall in profit after tax (PAT) will be even more dramatic.
The stock price chart of Sterlite Technologies suggests that the market is expecting some such thing to play out since Jan-19.

The stock price has come down by 60% just in the last 8 months. 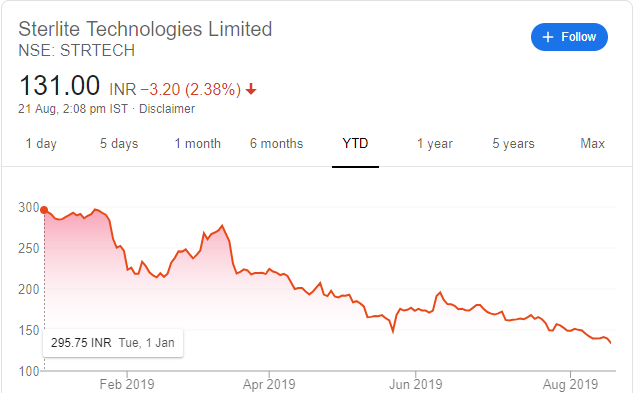 Note:
I purposefully not written about the issue of pledging of promoter shares and the shares being unencumbered later as this factor did not play a part in my decision.

Disclaimer:
This article is not a stock recommendation but an illustration of the kind of analysis that goes into fundamental research and equity investing.
I (@amey153) am a SEBI registered Investment Advisor.